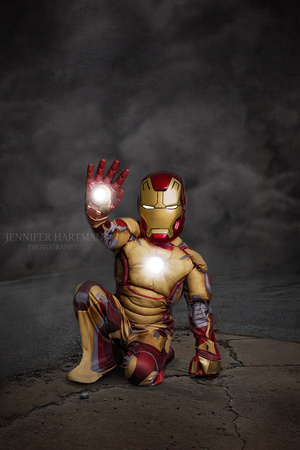 I love super heroes! I have since I was little. I remember going through my brother's bottom dresser drawer and reading X-Men comic books. I'm such a nerd when it comes to watching The Flash & Arrow and my husband sadly shakes his head at me when I bump him off of the TV.

I'm always spouting off about the latest DC or Marvel movie or critiquing the casting choices (I'm looking at you Ben Affleck..the new Batman just makes me sad) My husband has been pushing Star Wars on my son since birth and it just never took hold. It was trains and then onto dinos with not even a flicker of interest in Jedis or the Dark Side, but to my utter delight he has really taken to super-heroes.

Don't get me wrong, he still LOVES his dinos but now he'll run around the house being Iron Man or Spiderman and it's quite common for those superheroes to encounter dinosaurs. Our newest photo project kind of happened by accident. I got stranded at Wal-Mart in early November with a nail in my tire and had to amuse myself for almost 3 hours while they replaced two tires. I think it was about 2 hours into my forced Wal-Mart stay and I had finally exhausted my perusal of the toy and craft aisles and I found myself in the Halloween Clearance.

I saw a Spiderman costume and a light bulb went off. These would make the best dress up clothes for my little guy to play with and at 75% off I got every single one in his size that I could find. He was ecstatic and ran around as Iron Man for hours.

When December came along and I was out Christmas shopping I found myself in the toy aisle of Target with the coolest Iron Man gloves. They lit up and made some pretty awesome noises. I like to think that I got them for the 5 year old but....

I never knew that the Super hero aisle even existed. I've always been in the dino or train aisle. ALWAYS. There were Captain America shields, Thor hammers, and Hulk fists.  It. Was. Amazing. At that moment I decided that some of these should be under the tree and just maybe we could use these awesome toys in some pics later on.

I was ecstatic last week when he came up to me and asked to put on the costume and take a picture. I put up a dark backdrop because I figured that this was going to be a pretty moody looking picture and then we googled Iron Man and looked through images, because I'll be honest, my superhero poses are a little rusty. His eyes lit up when he saw one with Iron Man breaking asphalt with his fist. We shot a pose similar to that and then a few more.

When I pulled the images up on my computer that was the one that screamed at me for editing. He came up behind me and started instructing me on what needed to happen.

"You're going to make a crack right? I'm breaking the cement Mom."

Then he would scrunch up that adorable face in concentration and say.

"I need light beams coming out of my hand."

And off he went leaving me to make his vision come alive. And let me tell you, it's a pretty awesome feeling to be able to do that!

This edit was a couple hours with a quick run around town in freezing temps to locate that nice splintering crack. I'll give our city some credit because I had to find that at an abandoned gas station because our roads are well taken care of.

I was super sad to cover up his beautiful blue eyes but I knew he wasn't going to let it go if his eyes weren't lit up.

On the plus side we also shot two other super-heroes that day and his eyes get to show in both of those!

Below I've attached Before (straight out of camera) and the After. Just look at that blonde hair peeking out, love it! 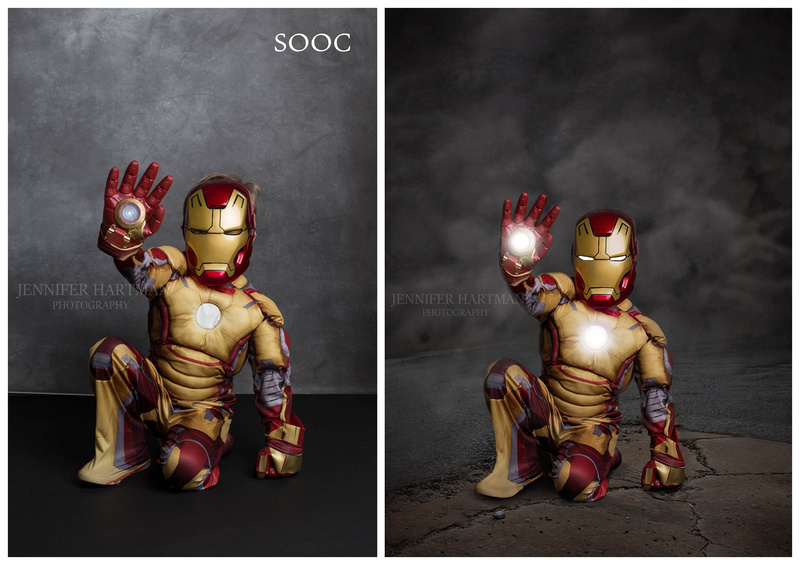