A lot of people know me by my son's dinosaur pictures. They're a lot of fun to make and he just LOVES seeing them all finished. He is such a ball of energy and it's fun to watch him focus and tell me what he would like to happen in each one. When people see these pics, they immediately ask me how it was done. Well, I'm an open book and I love to talk about photography and compositing so in this post I'm going to walk you through the thought process and how I make them happen. I always tell people that it's a big puzzle and you just have to make the pieces fit. This isn't a tutorial on compositing (give me a yell and I'd be happy to tell you about it), this is about how this image came to be.

This Summer my children and I are walking around in the toy aisle of Target. My son is going through the dinosaur toys like always and telling me what he wants for his bday that's not until Nov. I'm snapping pics with my phone because there will be consequences if I can't pull these up on demand.  We see this awesome Jurassic World gate and I think, that would be a cool thing to use in a picture.

Fast forward a few months and he has decided that he wants a Jurassic World birthday party for November. My first thought is to do something with that gate. Every time that I picture his birthday invitation I want him walking up to those gates. But composites take time, like a lot of it and I'm going into my busy season with a full editing board. So I pull out my lights and do a couple pics of him thinking that I'd throw a dino shadow behind him on the backdrop. I'm thinking of dark and moody and let's face it, pretty simple. He's throwing out all of these dino hunter ideas and is so excited. That dang gate keeps coming to mind and I finally just give in. I know that if I have a vision then I need to just do it. It's stuck in my head for a reason. So I pull up my the image from Target on my phone and I'm looking at this. 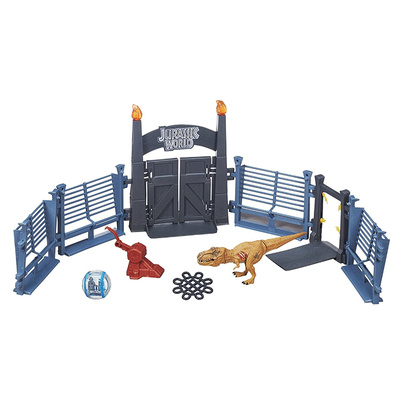 I decide that I'm going to do it. I go out that day and buy the gate. He's super excited for a new toy and thinks that it's the most amazing thing. I'm looking at it and thinking "Those plastic flames are gonna have to go".

Once I have an image in my head, I'm constantly looking for other aspects of the image that I can photograph. So a day after I buy the gate I'm coming home from a session and I see a half paved side road. So half of the road is perfect black asphalt and the other is rock. I need that black half. I know that I want a road way going into the gate. I also know that if I photograph an entire road then I'm going to have to shrink it and I'm going to be messing with my pixels WAY too much and losing resolution. That one perfect half is what I need. So I cross my fingers that no one will be screaming down the road in their vehicle.

One HUGE thing in compositing is angle and by huge I mean if you mess this up then you're pretty much out of luck. I click back to that image in my head and I see that I'm looking up at the gate. I need an incline and this road has a nice hill to it. If I shoot from my height then I just messed with that image in my head. I need to shoot from the road. So I'm on some side road with my camera almost on the asphalt and finding the focal point that my son will be standing. This is another huge thing, I can't stick an in focus child on an out of focus road. The puzzle piece just doesn't fit. I head home with the first puzzle piece shot and now it's time to shoot the rest of them.

So I plan a day to take pics and then wait for the sun to go down some more. I'm shooting this with natural light because this gate is shiny plastic and studio lights would bounce off of it and mess the whole thing up. I grab the gate, my dino loving boy and a dinosaur because he insists that there needs to be one in the opening. Here comes that angle thing again. I need to shoot from a lower angle just like I did with the road. This isn't a hard thing to do with a toy. I can stick it on any flat surface and raise it up. My son, not so much. So I notice that my driveway has a nice little height on it. If I get in the street then I can nail that angle. AND since my son will be standing on cement, it will make it lots easier to blend him in with that asphalt that I already shot. I enlist the help of my husband to make sure no one runs me over and then I get down in the street and shoot the gates. They have to be shot at a lower angle than my son because they need to be huge. So belly on the ground I throw that dinosaur in there because why make my life harder by trying to add him later. Small shortcuts can save lots of time. Next it's time to shoot my son. I don't have to lay down to get the correct angle on this one, I just need to be somewhat lower. I now have two more puzzle pieces, but I need a background. 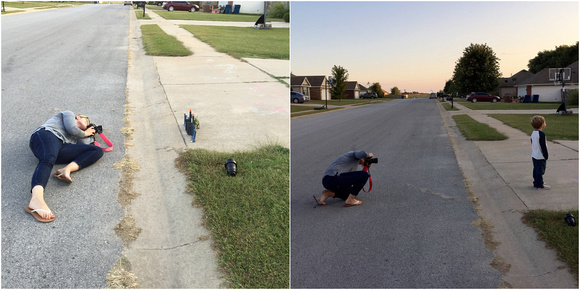 Since I still have pretty much the same evening light I take a drive. I'm looking for trees that frame an opening. I need to be able to throw a gate between them and have a pathway for my road. When I find it, I get out and crouch down low and shoot it. I just got another puzzle piece. I just have one more thing. Those darn plastic flames HAVE got to go. I didn't go through all of this to have plastic flames in the pic. So I grab some lighter fluid, fire starters and head out to my fire pit in the back yard. Sitting on the ground I'm shooting flames from a low angle and making sure to underexpose the image since I know I'm going to have a darker background and this will make cutting those flames out a whole lot easier. 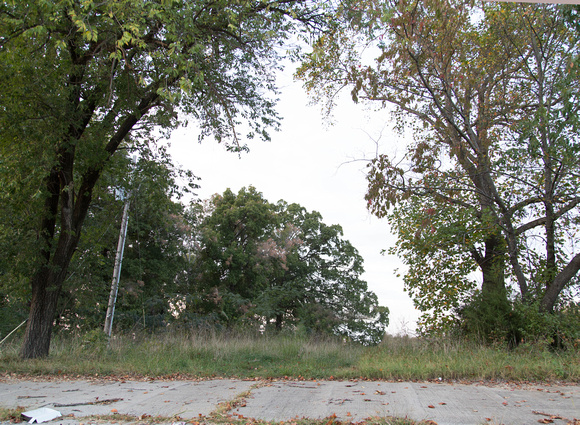 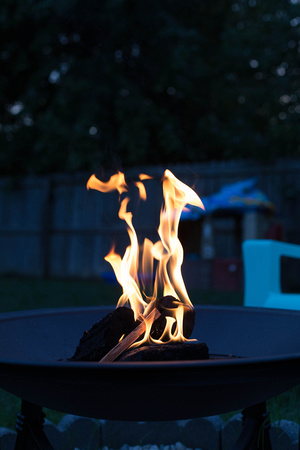 Now I finally get to pull all of my images up on my computer and get to work. I have all of my puzzle pieces and now I just need to make them fit. I mentioned earlier that these things take time. I'll admit that those fences about did me in. With a layer mask I had to erase between all of those slats zoomed into 200%. Four hours....those fences took 4 hours to clean up. I was so over those fences by the time that I was done. I threw some texture on my gate to make it look more realistic. I gave my son a shadow since he's facing an open gate with a lit sky behind it. Added grass up over the fence since it wouldn't make sense for there not to be any. Brought in some fog to add a little moodiness and then got to work shaping flames and adding illumination around them. My son woke up from nap right after I added the flames and he was just in awe that there was real fire there. Those big eyes full of wonder, now that's why I absolutely LOVE doing these.

After I worked a few more hours blending, I shot it out to my Mom, my sis-in-law, and a great friend of mine. They're totally used to this and their job is to pick apart anything that doesn't make sense or looks wonky. After working on an image for so many hours, fresh eyes are needed. They rock and help me to make sure that it has believability to it. With any composite you HAVE to have that believability because someone might not be a compositer or a photographer but we all know when something just doesn't sit right with us. We're not drawn to an image when something is off. Even if we can't put our finger on it, something just doesn't jive and we reject it as believable.

Then the image gets a final look over by the birthday boy and he gives his approval! We now have our final image. 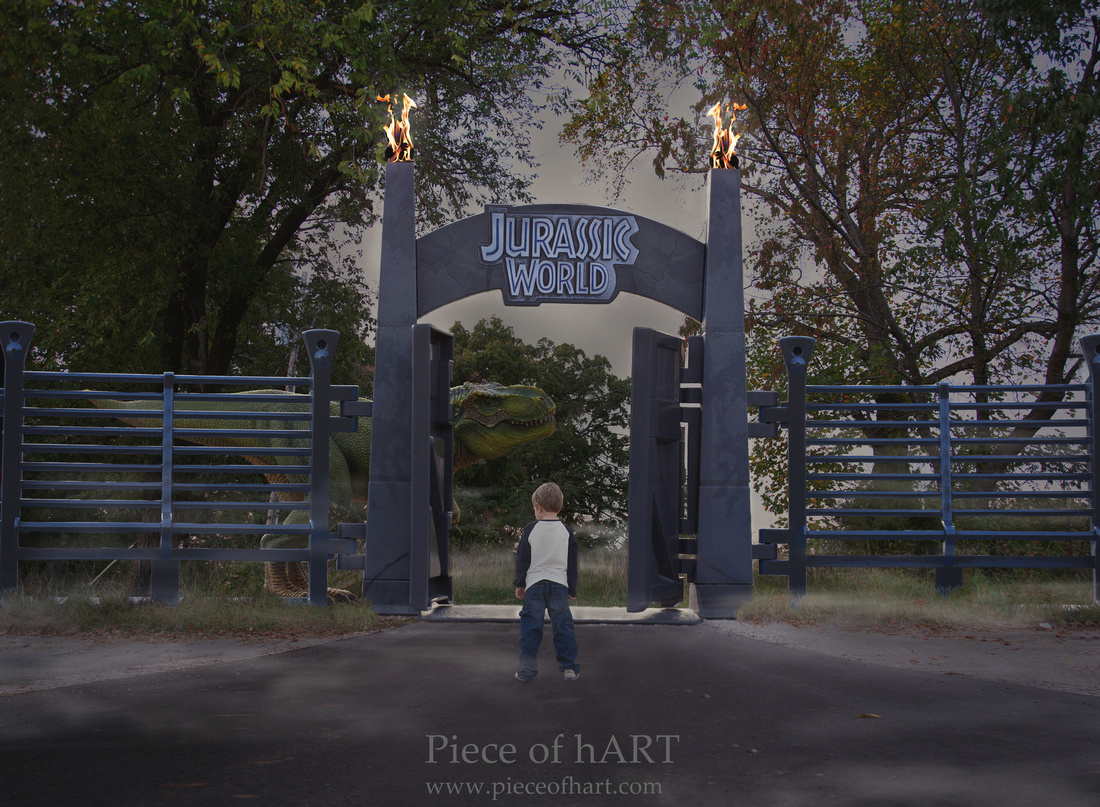