Sleeping beauty has to be one of my all time favorite projects so far. Since this one is so special to me, I wanted to share a little bit into the making of it.

Last Summer my daughter and I started our Princess Photo Project. This is actually the third dress that we made. I had a pattern and I knew it would be made out of satin and organza. There were so many shades of pink to consider and after perusing the internet and my daughter's bookshelf I had some in mind. I remember my Mother texting me to let me know that it was definitely light and dark pink. Then came choosing buttons and trim. I spent quite a bit of time going back and forth between sequins and the trim that we went with.

After it was all done I just sat back and waited to figure out what to do with it. 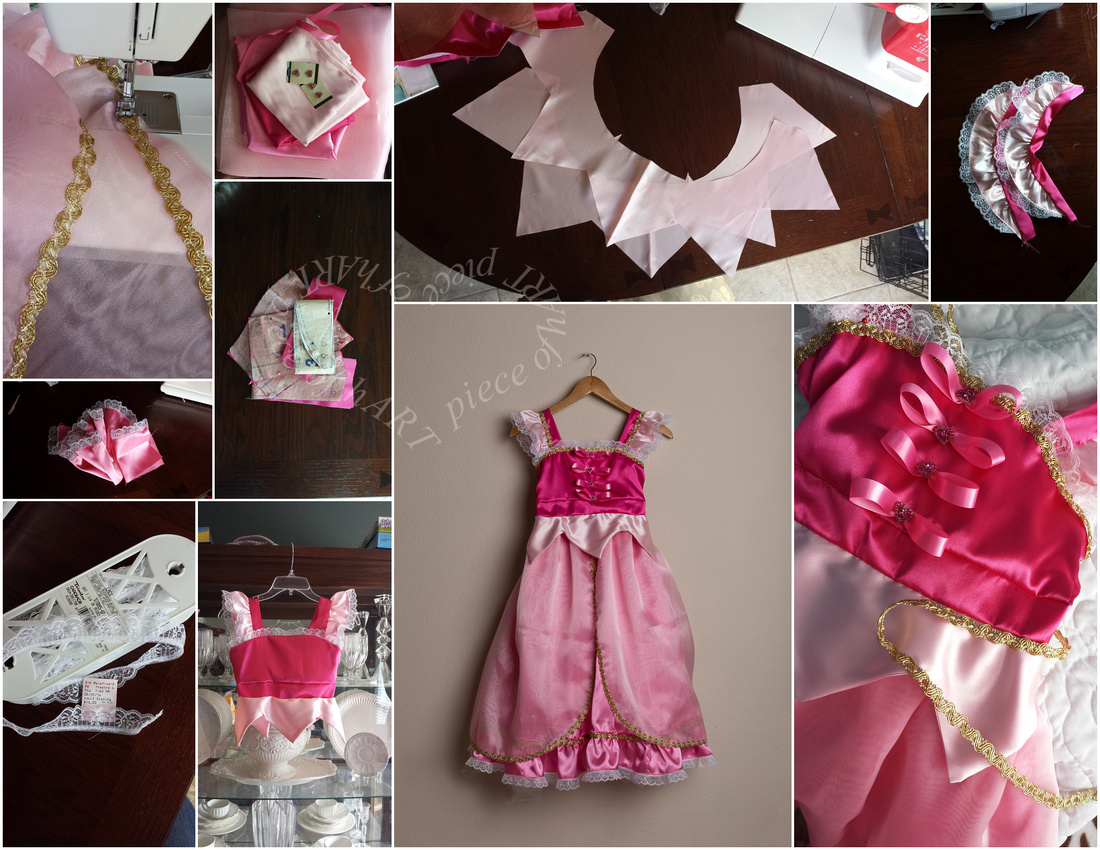 I had originally thought of using my daughter's Great Grandmother's spinning wheel but it was so very old, fragile, and we had to wait until we traveled back to her house to shoot it. Months later I decided on doing a levitation picture which my daughter was super excited about. That way we had our own spin on it.  So now we have the dress and a plan, but no castle. This is me on a cold December day shooting those awesome stone walls you see on the right. Castle wall-CHECK!

So..next up was making her levitate which worked out pretty well.

Her picture was a composite of 3 images of her. Sleeping Emma, skirt floating Emma, and then after I had it in PhotoShop I realize that I REALLY needed to see those gold shoes. About 2 weeks after we shot her pic I had to recreate the scene with her shoes peeking out. So we did a foot re-shoot.

THEN...my castle floor was a bit dull so I thought 'We need roses'. I looked at bouquets of real ones and settled on some waxy fake ones. I debated on pinks for a while and then went with some that matched her dress. BUT...I needed petals. So I tore these guys to pieces and threw them all over the floor. THEN I shot them individually because I want them to float. At this point I'm all pumped about this photo until I pulled them up into Photoshop and realized that these guys were going to take hours. Each petal had to be cut out and then shadows added individually in Photoshop. Then it was about arranging them and turning them to where I felt they should fall.

Then it was all about the editing. I decided that her hair needed to float so I cut and moved hair around (She LOVED seeing this happen). I gave it all that dark castle look and BOOM we have one of my favorite images to date. Yes, these pieces take hours & hours to make. Sleeping Beauty was months in the making, but so worth it.